The COVID-19 pandemic has caused many organizations to rethink how they address the safety of their employees and customers as it relates to infectious diseases.

More than ever, organizations are relying on their trusted advisors in the form of security manufacturers and integrators to help them adapt. Conversations often turn to the use of thermal cameras as a method of measuring elevated body temperature (EBT), but are they the right tool for the job?

A thermal camera measures energy emitted in the Long Wave Infrared (LWIR) spectrum of roughly 8,000-14,000nm, which is commonly expressed as heat instead of light. These emissions can be approximately correlated to specific temperatures, or temperature ranges.

Conventional cameras detect visible spectrum light (~400-700nm), which is reflected off of or emitted by objects, rendering images that look similar to what the human eye observes.

The two different kinds of sensors can show very different interpretations of the same scene, as the image below illustrates. Certain materials, such as the plastic from a garbage bag, will block visible spectrum waves, but allow LWIR waves through. Conversely, plastic that is transparent to the visible spectrum can completely block LWIR spectrum. 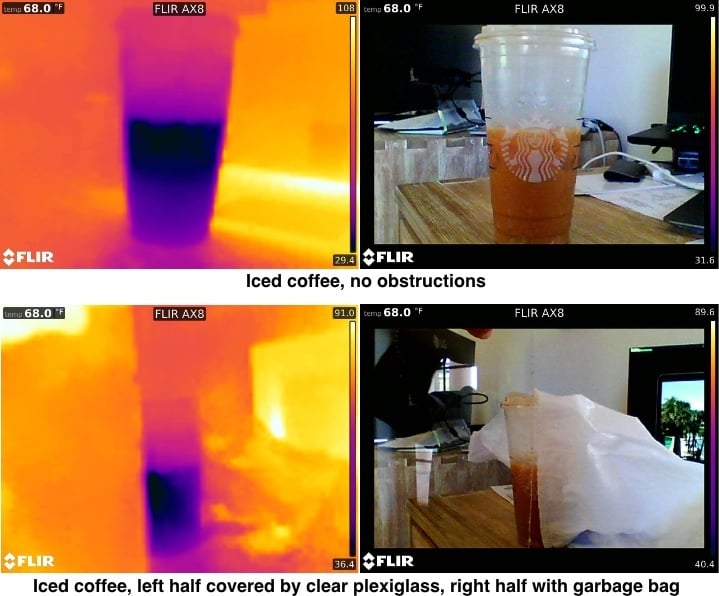 Because the LWIR wavelengths are not visible to humans, thermal cameras convert these wavelengths to ones in the visible spectrum, allowing us to see them with relative representations. If you have ever configured a thermal camera, you would have likely seen palette selections such as “White hot” or “Black hot” or “Rainbow”, which are just different options for mapping the temperature ranges detected by the camera (or technically, the “microbolometer”, which is the actual name of a thermal camera sensor) to colors a human can relate to.

Using a thermal camera to measure temperatures, and to generate alarms and data on specific temperatures is referred to as a radiometry, or thermography.

In every case, what thermal cameras detect are the wavelengths emitted by the surface of an object, which may or may not correspond to the internal temperature of that object.

While the world has become accustomed to visible image sensors having several million pixels (“megapixel”), the average thermal sensor is still relatively limited in resolution, most commonly in the range of ~320x240 pixels (~76,800 pixels, or .07 megapixels). A number of thermal cameras have even lower pixel count, and the highest resolution thermal sensors used in the commercial/security space today are generally never more than 640x480 (~300,000 pixels, or .3 megapixels).

An object being measured generally needs to cover at least 9 pixels on the thermal sensor in a 3x3 grid to get the most accurate measurement. Ideally, the object being measured covers a much larger area, giving the device the ability to better determine a stable temperature for the spot being monitored. Ultimately, the temperature readings for given location in the image are going to be the average temperature of all the pixels in that area, so object size relative to the image will directly correlate to accuracy of the reading, assuming that the camera is properly designed and calibrated for accurate measurements in the first place

To best understand how to use a thermal camera for radiometry, it is important to understand emissivity. While a lot of time could be spent on this topic, the primary considerations are that not all objects emit heat similarly and at the same wavelength (eg: we cannot always assume that a measured wavelength of 10,000nm corresponds to a specific temperature), and that several conditions can affect the emissivity of an object, such as viewing angle, surface coverings (dirt, makeup, hair, etc.), moisture, and material of the object.

Since we are focusing on the use of thermal cameras for EBT detection, the most important factors to consider for humans would be things like perspiration, makeup, or lotions on the surface of the skin. Two objects with the same surface temperature could give different thermal readings, depending on the presence (or absence) of these things.

When investigating thermography in the context of precise readings, a “blackbody reference device” may be mentioned. A blackbody is an instrument that is calibrated to represent perfect emissivity. It is placed in view of the thermal camera at the same distance the measurement will occur, and then is used by the camera to generate reference data that can help it counteract ambient conditions that may be skewing its readings. Note that the camera itself must support the use of a blackbody reference as a configurable reference point, simply having a blackbody in the scene will not help accuracy if the camera does not know to use this object as a reference point.

Like most instruments, a black body will need to be recalibrated and recertified at some interval. The manufacturer of the device would specify these parameters, and the costs for the recertification. This would usually involve sending the device to a laboratory, in which case a backup unit would need to be sourced.

Because the use cases driving the bulk of the thermal camera market in the security and consumer sectors are not driven by precise temperature measurements, the microbolometers manufactured and sold here are not calibrated to be precision instruments. Almost every microbolometer manufacturer will have a product line offering that is more precisely calibrated, and available at a higher price. It is also worth noting that there are a number of factors that can drive up the cost of a thermal camera, and that an expensive camera does not automatically mean it will have any degree of precision. This has been especially true recently as thermal cameras have been marketed as fever detectors, which they cannot do, as we explain further below.

Humans do not have a single specific temperature that indicates “healthy” or “unhealthy/infected”. A normal core temperature (internal body temperature) range for humans is generally considered to be 36.5–37.5° C (97.7–99.5° F). Body temperature in a healthy person also tends to increase slightly throughout the day, and will also increase temporarily after heavy exertion, such as exercise, and can also be affected by ambient temperatures.

A fever would technically be considered anything above the “normal” range, but medical professionals will take several factors affecting a temperature reading into account before diagnosing it as an actual fever that indicates an unhealthy condition.

What Thermal Cameras Can Tell Us About Fever

The closest approximation to body temperature is the inner canthus (corner) of the eye, however this is a very small surface area, requiring the person being monitored to be fairly close to the camera in most cases to ensure the spot size of the measured area is large enough for the camera to get a good reading. Also, because glass blocks emissions in the LWIR range, people will need to remove glasses in order to be scanned by the camera.

Recall, thermal cameras have low resolution sensors, so a person needs to be closer than you might expect in order for the camera to get a good reading. This would typically be no more than 4-5 feet, though technically lenses with longer focal lengths can be used to measure at greater distances, but you also risk more chance of error at longer range, even with a blackbody.

For most thermal cameras, screening more than one person at a time would be impractical. Doing so would require the persons to be relatively close together to enable the camera to have enough pixels on each of them to get an accurate reading, which would violate most “social distancing” guidelines.

Forehead temperature will not be an accurate representation of internal body temperature, as the thin skin of the forehead will be heavily affected by ambient conditions, such as temperature, wind, etc. This would be further affected by any perspiration on the forehead, or other factors such as if the person was recently wearing a hat or other head covering.

This is All Great, But My Boss Still Wants To Do This, What Should I Do?

Although the results are unlikely to be a reliable indicator of anything, if you still want to use thermal cameras for EBT, here are some guidelines:

Ideally the camera you choose would meet some basic guidelines and specifications that show the manufacturer understands this application sufficiently, and has not just tried to rush something to market. These would include:

Setting Expectations For Ongoing Use

The thermal screening station will likely need to be staffed with full-time personnel, equipped with proper PPE in order to efficiently manage secondary screening of persons suspected of infection.

There should be some expectation that initial setup and tuning may be time consuming, and that the system will unlikely to be a set-it-and-forget-it kind of deployment. Systems integrators could use this opportunity to sell service maintenance agreements to cover the expected ongoing support requirements to keep the devices operating with highest accuracy.

Given the way a system would typically be configured in terms of picking a threshold point for alarming on a high temperature reading, it would be reasonable to expect that persons with an actual fever are more likely to be missed than persons without a fever are likely to be false flagged.

While thermal cameras can not be used to detect an actual fever, they can be a tool to help screen for potentially infected individuals when deployed properly and with managed expectations.